Are You Feeling Trapped? 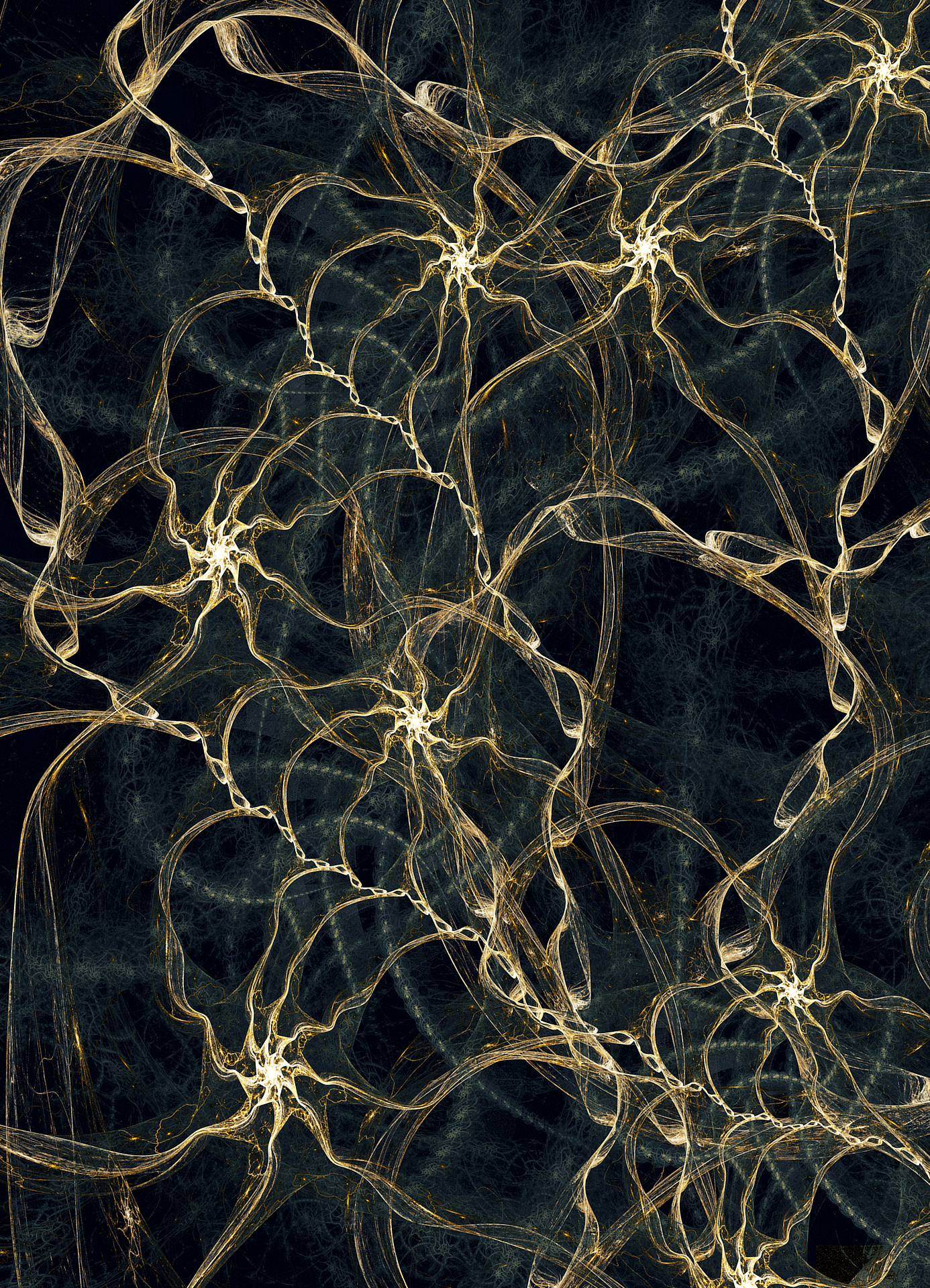 Sunday’s Global-Galactic Drum Meditation at 9 a.m. revealed more information about the “trap” that Earth and Earthlings are dealing with. (previous messages at she-dragon.com)

During the drumming I saw and felt dark sticky threads and a pac-man figure cutting these threads/cords from people and planet.

Pac-man reminds me of white blood cells coming to the rescue: 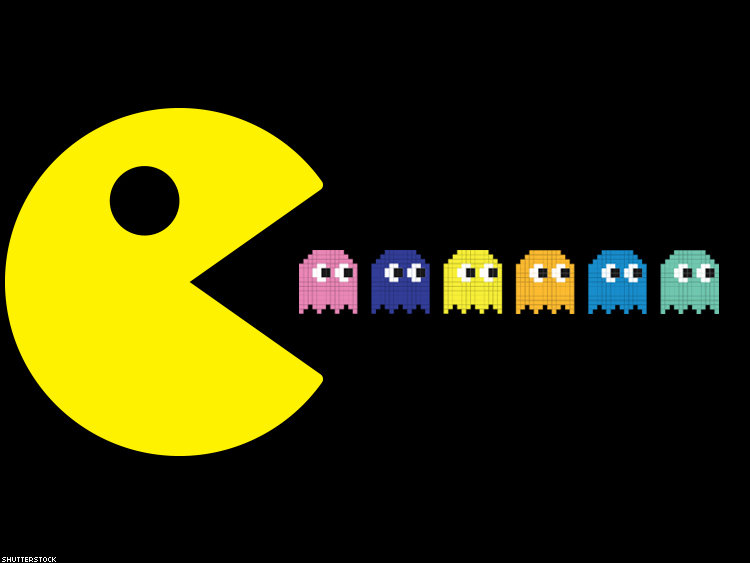 White blood cells (WBCs), also called leukocytes, are the front lines of defense when it comes to our bodies fighting off germs or infection. When we are sick, the immune system snaps into response mode by sending white blood cells to fight off the foreign infection—by either producing protective antibodies or by devouring the bacteria.

Lightworkers serve as white blood cells for Earth and Eathlings and serve as this picture of lights indicate. Imagine black threads in a fear based network transforming through Light into Light.

Could someone make a video game about this “battle” of Light overcoming Dark here on Earth ?? Or is one already made? 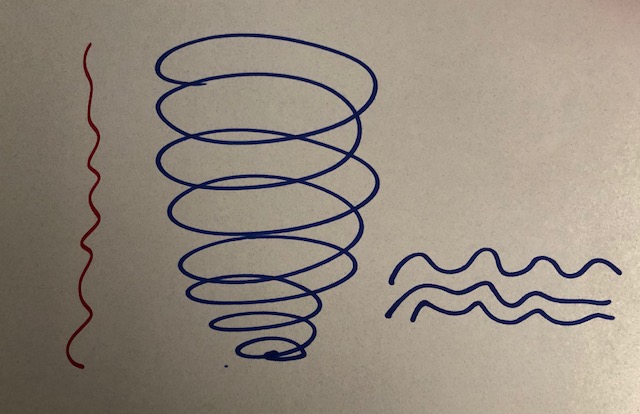 The intention for the September 16 Drum Meditation was to focus on peace in the Middle East. As 9 AM approached my turtle rattle called to me so I picked it up and started to rattle. The first thing I saw in this trance state was a squiggly line moving N/S. I knew immediately (faster than the speed of light!) what it meant because I didn’t have to think about it in this state of mind. “Contract” was the word coded in the image and I knew it meant that contracts are to be burned/destroyed. The Middle East is entrenched in contract chaos–invisible agreements–that perpetuate hating and killing. I rattled in support of this burning to make all things new.

As I directed the drumming to the land of the Middle East an energetic Spiral grounded and as I closed the drumming the same spiral ascended. Is a spiral a vortex? Is a vortex a portal? What can this spiral tell us about the grounding and ascending of space craft here on Earth?

During the drumming waves covered a land mass as the words New Jerusalem spoke (again faster than light). I know New Jerusalem from the Biblical book of Revelation:

Then I saw “a new heaven and a new earth,”[a] for the first heaven and the first earth had passed away, and there was no longer any sea. 2 I saw the Holy City, the new Jerusalem, coming down out of heaven from God, prepared as a bride beautifully dressed for her husband. 3 And I heard a loud voice from the throne saying, “Look! God’s dwelling place is now among the people, and he will dwell with them. They will be his people, and God himself will be with them and be their God. 4 ‘He will wipe every tear from their eyes. There will be no more death’[b] or mourning or crying or pain, for the old order of things has passed away.”

5 He who was seated on the throne said, “I am making everything new!” Then he said, “Write this down, for these words are trustworthy and true.”

6 He said to me: “It is done. I am the Alpha and the Omega, the Beginning and the End. To the thirsty I will give water without cost from the spring of the water of life. 7 Those who are victorious will inherit all this, and I will be their God and they will be my children. 8 But the cowardly, the unbelieving, the vile, the murderers, the sexually immoral, those who practice magic arts, the idolaters and all liars—they will be consigned to the fiery lake of burning sulfur. This is the second death.” 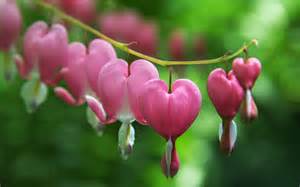 I went for a walk last night in my new neighborhood. Something kept pulling me toward a church a few blocks away. It was their Friday nights’ Meaningful Movie and the “Occupation of the American Mind” is what I walked in to. I have been ignorant and confused about the middle East crisis. What to believe? My eyes and ears were opened as I watched this documentary. No wonder some of my friends are anti-mainstream media! This land and these people (on all sides) are crying out for healing, for forgiveness, for freedom. The Global-Galactic Drum Meditation tomorrow (Sunday) at 9 AM will focus on this land we call Egypt, Israel, and the Gaza Strip. Let’s forgive those who have forgotten their inherent divinity and that we are all brothers and sisters of ONE global-galactic family. Let’s radiate beams of light as human beings and receive beams of light from Galactic beings. In doing so we charge/activate Gaia’s crown chakra (image at she-dragon.com) — supporting the parts of ONE whole family. Jesus is with us…he loves the land he walked on. Mary is with us as well !! We drum and meditate in the name of Universal LOVE and ORDER 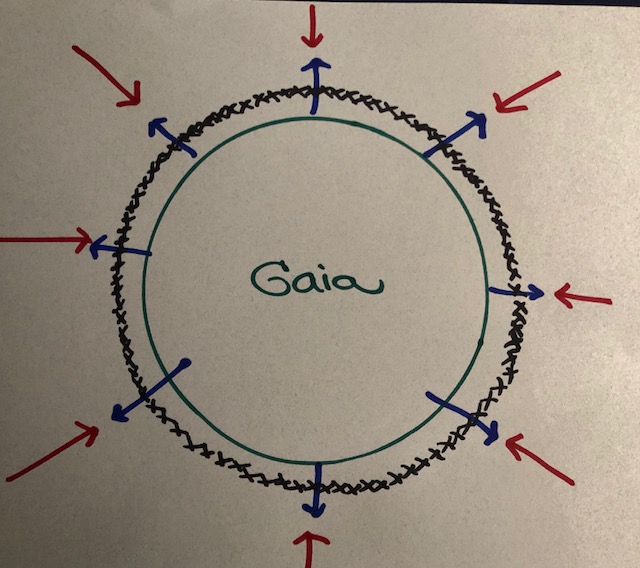 I often forget details and events as I move on to the next moment. Today, however, this recent event kept nudging me to share so here goes:

During my Global-Galactic Drum Meditation last Sunday (9/9/18) I saw people emitting beams of Light Energy that pierced a dark, toxic veil surrounding Earth. As Earthly light beams streamed out into space Galactic beams streamed in. This “contact” of beams reminds me of fusion:

Fusion is the process of merging atoms together to create energy; the consequence of fusion is the absorption or release of energy.

Enlightened humans (this does not mean that one is 100% perfect–a saint–it does mean that one is conscious of one’s ego and light bodies and the choices one makes) are Earth’s Crown Chakra. We are her protector and support a larger immune system to keep dark forces out in order to sustain equilibrium, harmony (holistic health) at global and galactic levels. Yes, humans have a critical role to play on Earth!

Why are we trapped in this dark veil of toxic darkness? My friend, Steve Leombruno gave a talk on Black Triangles/Edmonds Lights at our SUFON (Seattle UFO Network) meeting last Sunday and this is a quote he shared:

Optical Trap Display
The technique uses a light field to trap and move a small particle through space. The light field itself is nearly invisible to the human eye, but the particle is illuminated by red, green and blue laser light as it speeds around to map out the surface of the represented object. It thus creates the appearance of a solid 3D object with a range of colours and fine details. If the particle zooms around fast enough, the image can even appear to move like a video.

Could this be what has happened to Earth and Earthlings? Are we set in a trap of holographic optics? Are we limited in our view and thus our frequency because of the veil around Earth? How do we free ourselves and our Beloved Earth? By sending out light beams in meditative alpha/beta waves. By fusing with Galactic Beings of Higher Intelligence–Beings of Light !!